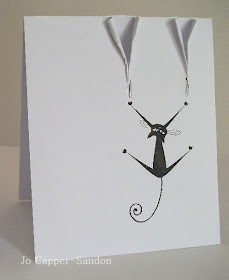 My entry for the Less Is More challenge this week has been playing on my mind as I felt there perhaps wasn't enough white space on the cowboy card as there might have been especially for a CAS one layer.

So yesterday, on receiving some stamps that I bought from the French company Katzelkraft a week or so ago in their sale I thought their cats would be purrrrfect (sorry, had to be said lol) for the legs theme on LIM. I did purchase three of their 'Katz' but am saving the third for another theme. Their sale is still on by the way with upto 30% off some stamps- to translate the site just click the currency converter at the top of their page- also no need to worry re customs charges as we have to with America as they are European). 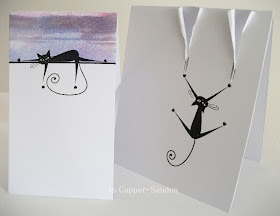 I hope that this is more in keeping with the Less Is More criteria as I do like to abide by the 'rules and regs' of a challenge site.
As you can see both are very quick and simple. With the lounging around cat I stamped in black and then used a selection of pencils and inks to colour the night sky.
With the Screech card I stamped in black and then cut two lines from the top of the card to his claws and curled back the card exposing the inside. I would have liked to have placed a piece of coloured card or paper as an insert to show through to the front but wasn't sure if that would count as an extra layer (it would have been inside )

Hope you like them...a bit of fun anyway I thought.

edit to say the Katz can be found here.
Jo Capper-Sandon at 10:17